Home overlooks a private Park in the back yard off its Large Patio. 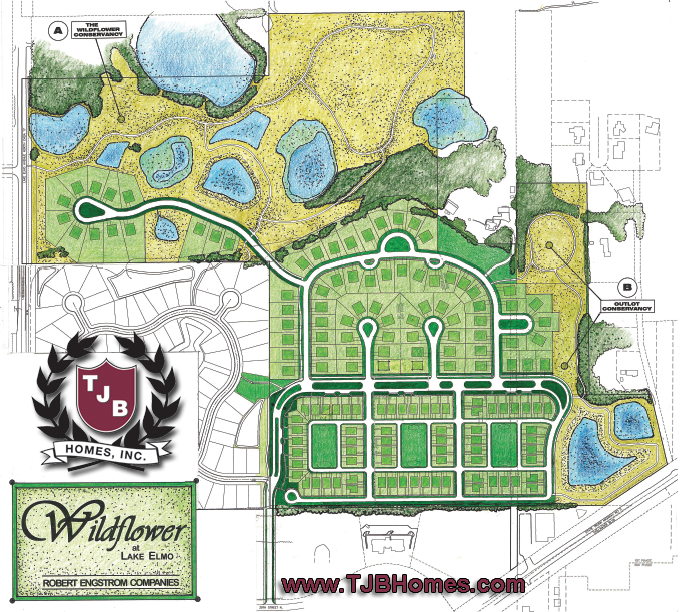 We are taking LOT HOLDS. Call 763-780-2944 today to reserve your homesite is this high demand community.

TJB Homes, Inc is excited to be The Featured Builder in Wildflower in Lake Elmo. We will have two areas of building. One area will include single level Detached Villa Homes built around a centerpiece Common Park area that includes Lush Landscaping. This area is No Snow/No Mow. Homes will be in the 1650 plus Sq Ft size with Private Court Yards. Prices will be starting in the $400's and up. The second area will be Single Family homes on larger lots. These homes will be a collection of Architecturally Designed Two Stories and Rambler plans. These homes will be in the High $500's and up. This is located within the Stillwater school district. 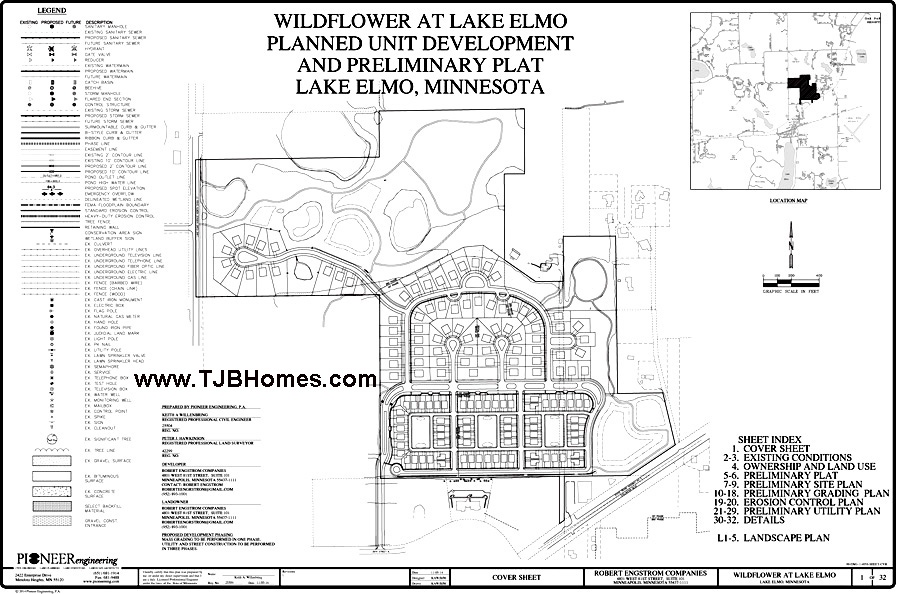 The Wildflower at Lake Elmo development preliminary plat was approved during a April 14 special meeting.

The Old Village of Lake Elmo will grow by another 145 homes after the preliminary plat of the development "Wildflower at Lake Elmo" was approved unanimously by the Lake Elmo City Council in a special meeting April 9. The 117-acre site is located immediately west of the Fields of St. Croix development and north of 39th Street.

Conforming to the medium- and low-density residential zone, the development will have a calculated density of 3.5 units per acre. This higher housing density is due to a 60-acre planned nature conservancy in the development with native plants and restored prairie. Included in the plan are three miles of trails and extensive association-maintained landscaping.

Of the 145 single-family homes, the development will include 67 courtyard lots - smaller sized lots surrounding a shared park - and 56 large lots in a main clustered area. Further away from the center are twelve 21,600-square foot "conservancy" lots and ten 18,585-square foot "bluff" lots that overlook the nature conservancy. The council applauded the diversity of housing options in the development.

"This is a developer who is thinking outside of the box," Councilmember Anne Smith said.

The development will hook up to the Eastern Village sewer project that will run through the Easton Village development and the 39th Street business sewer line.

Engstrom was also hired by the city on Aug. 3, 2005, as the Old Village master coordinator; a role that was designed to help organize and guide cooperation between landowners in the downtown area and to incorporate the Metropolitan Council Old Village requirements and some recent City Council initiatives into an Old Village plan.

The Wildeflower preliminary plat was previously included for discussion in the April 7 city council agenda. However, the council voted to table the discussion to the next meeting. In an effort to lessen the number of items on the agenda for April 21 and to respond to a request by Engstrom to vote on the plat before April 21, the council held the special meeting April 14 after a previously scheduled workshop. The council opened the special meeting at 9:30 p.m. and the vote to approve the preliminary plat was just before 11:30 p.m.Engstrom said initial grading of the plat will begin this week.

Read this article online at "The Stillwater Gazette".

Copyrights © 1996-2020 All Rights Reserved by TJB Homes Inc.
Please note: Prices and specifications are subject to change without notice. Builder and web developer are not responsible for any errors on Web pages.
© 1996-2020 Website by Management Specialties Web Services, LLC
Website Map