About TJB Homes | TJB In The News

TJB Homes, Inc made the list of Twin Cities Top 20 Builders of 2020 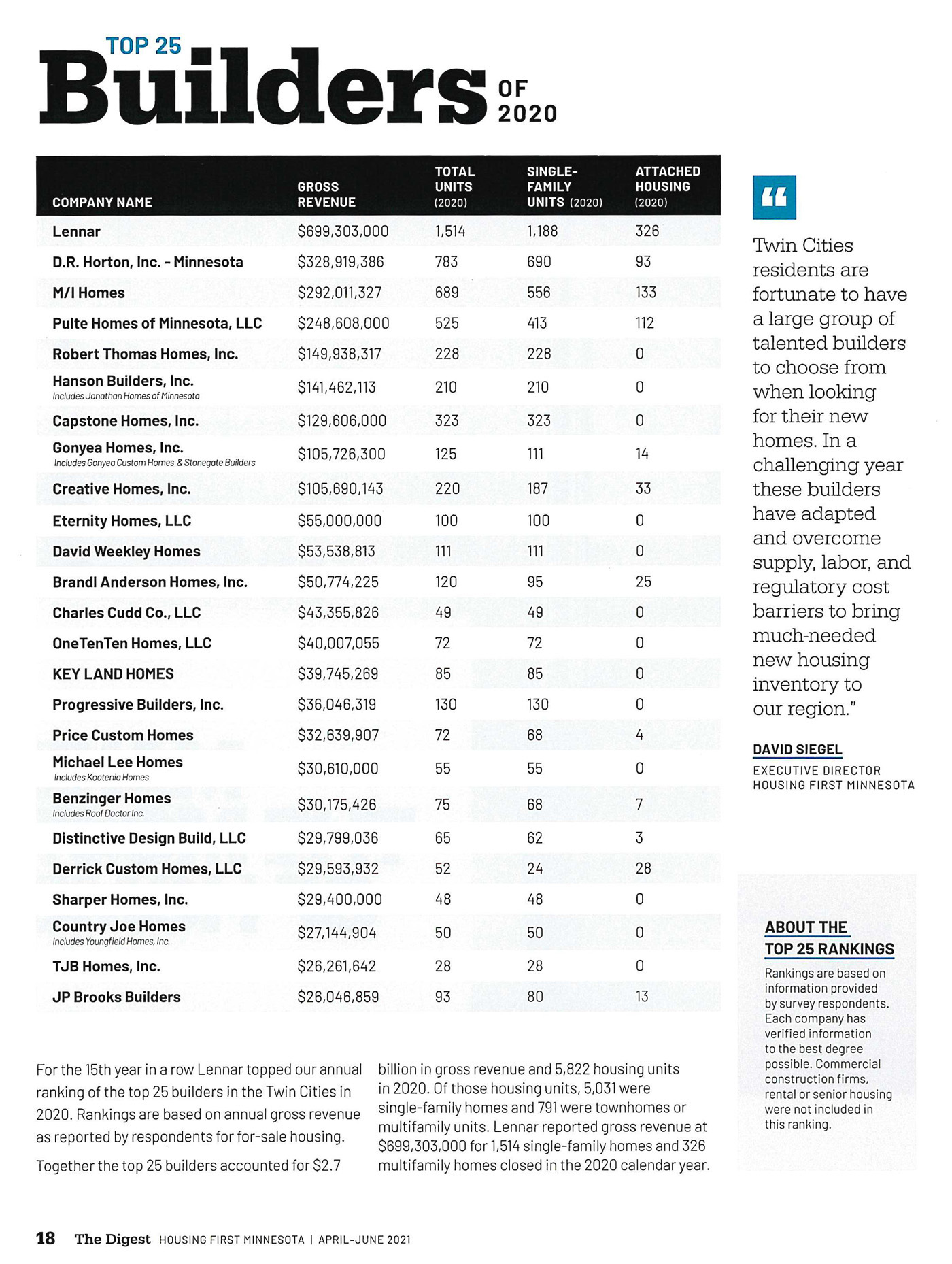 TJB Homes, Inc is a Member of Housing First Minnesota 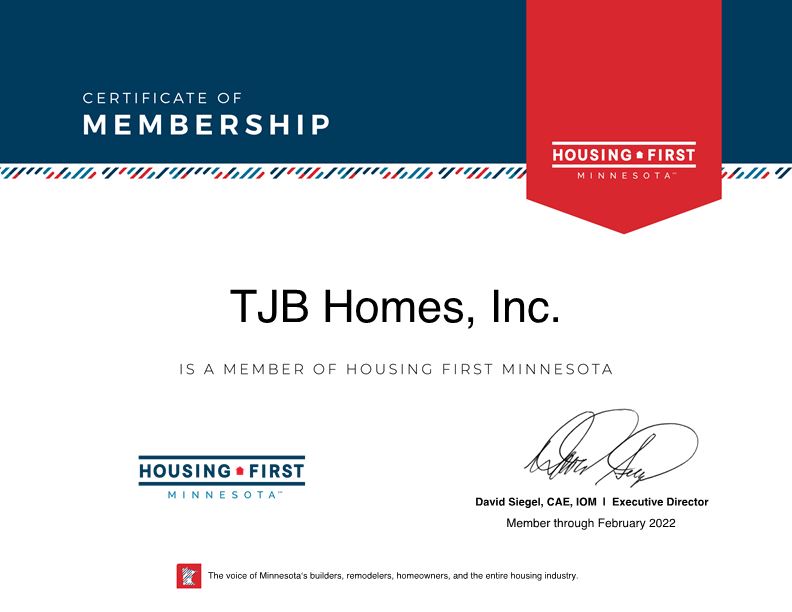 Important Electrical Code Changes Could Soon be Adopted Near You

With the International Code Council’s 2021 building codes cycle in full swing, it’s important to note another set of codes that may have a big effect on many home builders and remodelers.
Read full article... 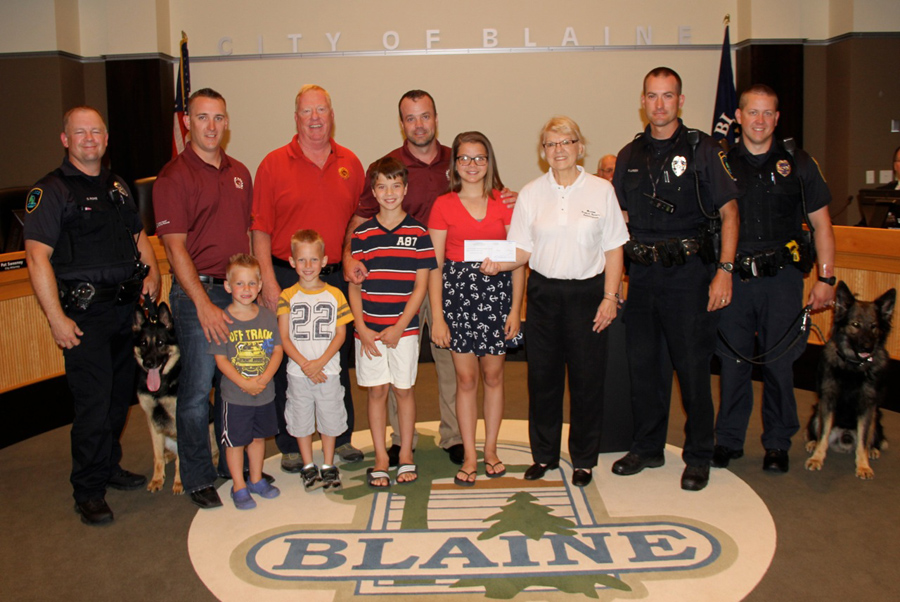 Since 2012, the Blaine Police Department has had the benefit of two K-9 officers so that it does not have to turn to the Anoka County Sheriff's Office or other jurisdictions when needing a backup officer that can quickly leap fences or fit into tight spaces when chasing a suspect or to locate hidden drugs. 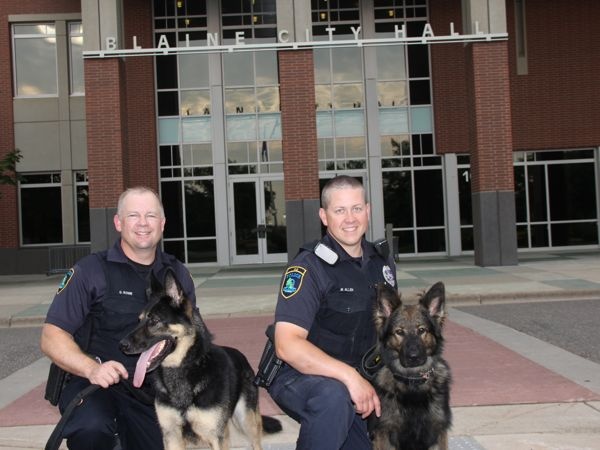 "The relief I see in people's faces" whether it be fellow police officers or civilians is what Blaine Police Officer Greg Rowe has enjoyed the most since he became Gunner's partner in February 2008, which was the first K-9 officer Blaine has had in recent history. Gunner was 17 months old when he came to the city from a breeder in Slovakia.

Osteoarthritis is ending Gunner's career a little earlier than anticipated, but officer Reginald Larson and his K-9 partner Rex will be joined on the force by an almost 2-year-old German Shepherd named Remy.

Mark Allen, an eight-year veteran of the Blaine Police Department, was chosen from a pool of four candidates to be Remy's partner. Rowe will still be part of the Blaine department that he joined in November 2003, and he will get to keep Gunner as a house pet. All K9 officers live at their partner's home.

"I love dogs," said Allen, who has been with the Blaine Police Department since 2006.

Allen and his wife have two kids, and two dogs, a black lab and a yellow lab. Remy moved in with Allen's family before he and his new partner started the almost three-months of training with Coon Rapids Police Officer Mark McDonough to become certified through the United States Police Canine Association. He graduated from this program June 20.

"The responsibility to the dog doesn't start and end with a shift," said Blaine Police Chief Chris Olson. "We all benefit from that relationship of that dog being at home because they are able to acclimate and socialize at home with family and kids and all that makes for a well-rounded K-9."

Allen and Remy had already been on eight calls by the time they were recognized at the July 10 council meeting, including separate incidents of finding marijuana in a car and a home.

Olson said Rowe still responded to other calls in which Gunner was not needed and this continues to be true. When authorities need to locate a crime suspect or a missing person, check school lockers or people for drugs, or do a public safety demonstration, a K-9 officer team is called.

Olson said there were many times when Gunner put himself in harm's way to protect Rowe, other officers and the public. He recalled an instance when Gunner took down a man who was trying to ambush an officer.

While criminals may have feared Gunner, kids loved him. Mayor Tom Ryan saw 150 kids line up to pet him after a July 9 demonstration at the Blaine Safety Camp.

"I thought about bringing him a big steak tonight, but I didn't know if that would be right," Ryan said.

"We certainly owe you a lot for what you've done," Ryan said to Rowe. "He's been an awesome dog."

The Blaine Public Safety Association has raised more than $40,000 through fundraising events and community donations.

The Blaine Public Safety Association's donation alone covers all city costs of purchasing Remy from a Czech Republic breeder along with reducing the cost to the city for food, medical and training, according to Daniels, who has been a vocal proponent for having a third K-9 officer in Blaine. She would like the $3,200 from TJB Homes to be the first donation for that.

For one night at least, Blaine City Hall had three K9 officers on-hand. Rex waited in the car while his partner Officer Larson joined his fellow officers in the council chambers to recognize the retiring Gunner and the new dog Remy. 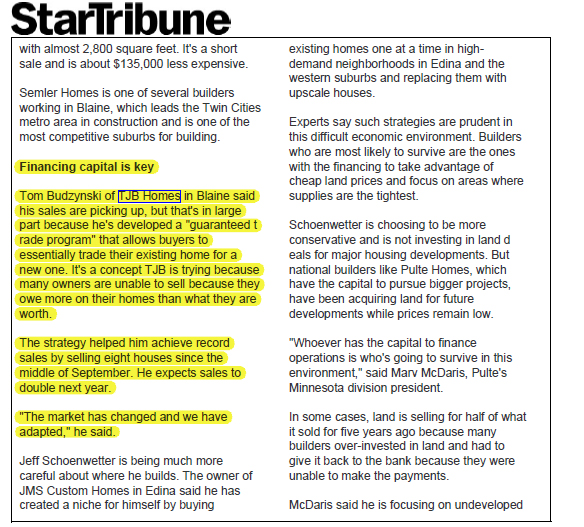 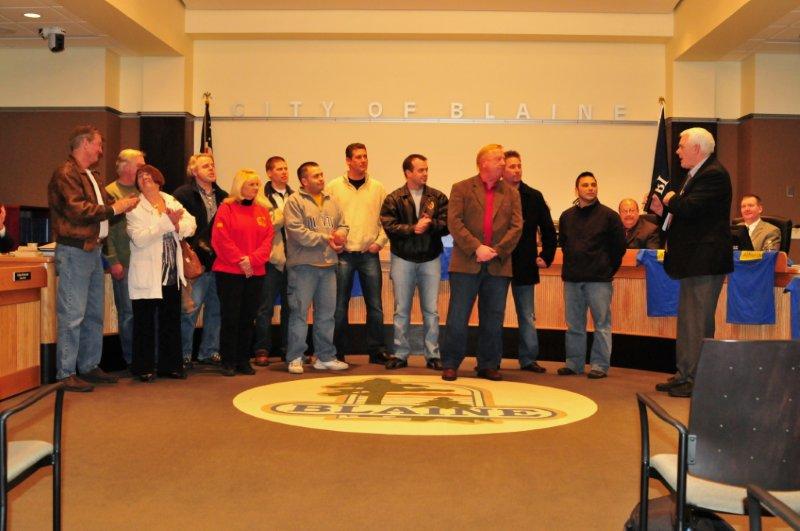 Appearing in the picture

Bob Chandler and Yvonne Ekdahl, Co- Chairs of the Fireside Committee, are pleased to announce that they will host their first 2010 event on Monday evening, February 1st, from 5 to 6 PM. It will be held at LoTo's located at 380 Jackson (in Galtier Plaza across from Mears Park on Sibley between 5th and 6th Streets) with cocktail hour beginning at 4:30 PM.

"Extreme Makeover Home Addition" has come to the Twin Cities twice in the last two years (their most recent being to build a home on Saint Paul's West Side) with both projects being headed up by TJB Homes, Inc., a local builder and land developer, whose President is Tom Budzynski. Tom has been featured in many magazine and newspaper articles including The Wall Street Journal and received a great deal of other media coverage.

Tom shares not only the challenges involved in initially organizing projects of this huge magnitude but also how they secured all the needed donations to complete them. Because of all the people and companies involved, these projects became a true community effort. Tom will also share many other interesting details regarding these projects and the families involved which the show could not address due to time constraints.

Don Shelby of WCCO is going to feature TJB as well as its foundation, TJB - Build- Dream-Give, Inc., on his 10 PM news show again this month.

If you have recently seen Tom on TV, you know that he and his organization have huge hearts for people and their needs and have "made a big difference" for many local families and done what would seem almost impossible - built a new home in 99 hours! They are wonderful examples of giving back to our community and having a great time doing so!

In addition, Tom will be discussing the local real estate market and what they expect in 2010.

There is no charge for this event. Waitresses will be available for cocktails and other beverages as well as food.

Because of space requirements, please RSVP to Sherry at the Rotary office is you plan to attend or you can sign up on line. Bob and Yvonne hope to see you on January 27th.

Home builders get creative to survive

Despite the beating the home building industry has been taking over the past few years, some Minnesota builders say they're managing to fare pretty well. They attribute their success to their creative sales techniques.

......
On the other side of the Twin Cities metro area, in Blaine, TJB Homes has also stayed afloat using creative techniques.

"Our sales are doing quite well. We’re keeping houses moving."

Owner Tom Budzynski said one of their tools is a "home trade." He guarantees his customers will sell their old house at a set price.

"Their house goes up for sale. If it sold for more money, they got it. If it wasn't sold, we took it over, and we had to handle it after that."

Buyers are typically purchasing a new home that’s more expensive than their old one, so they have to pay the difference in price.

Budzynski said since 1990, he’s gotten stuck with three trade houses that didn’t sell right away, but he eventually was able to unload them.

Joseph Strauss bought a house this way. He had been considering putting his house up for sale the usual way. But the trade went much faster.

"To resolve a sell and a buy in three days is almost beyond belief in this market," Strauss said.

TJB’s owner Tom Budzynski said the company also has a few other tools for selling in a tough market. "Greenv homes, an extensive Web site, and a stint building a house for charity on the TV show Extreme Makeover Home Edition also help bring in home buyers.

Budzynski said profits are still down about a third from their peak a few years ago. But he said the company’s business is picking up. That makes him especially proud, when so many other homebuilders have simply folded.

Connie Moore, executive director of Alexandra House Inc., is pleased to announce that TJB Homes has become a Hope Gala diamond level sponsor with an in-kind gift in excess of $30,000. "We are gratified by this generous support, and TJB Homes ongoing commitment to address the important issue of domestic violence. The generosity of local businesses like TJB Homes makes a real difference in the lives of those we serve."

The fifth annual Hope Gala is set for Saturday evening, March 8, 2008, at the Tournament Players Club in Blaine. This wonderful evening will include a silent auction, a "Sip Champagne, Win a Diamond" event, a wonderful gourmet meal with wine, an outstanding program with Vicki Swenson as keynote speaker, and a live auction. All the proceeds of this event will support our shelter and community programs.

Contributions from the 2007 Hope Gala raised more than $70,000 to help victims of domestic violence. These funds were used to support Alexandra House’s invaluable work in the community, including 24-hour emergency shelter services to 640 women and children, community program services to more than 1,470 clients, violence prevention in the schools reaching more than 4,000 students and teachers, and community education and professional training to 1,840 others.

If you are interested in being a sponsor, please contact David Wheeler, development director at Alexandra House, at 763.780.2332 or dwheeler@alexandrahouse.org. You will be joining other individuals and businesses that are committed to ending domestic violence for women, families and communities.

This summer TJB Homes of Blaine was chosen by Extreme Makeover: Home Edition to build a new home for the ten member Swenson-Lee Family. Because of Terri Lee’s domestic violence murder, her four children were added to her sister’s family, the Swensons. Not only did TJB Homes and other partners donate a 5,600 square foot home for this expanded family, but they also developed a strong commitment to continue the work of ending domestic violence.

The presentation of the $10,000 check in the photo signifies that commitment. Connie Moore, executive director of Alexandra House, saluted the fine work of TJB Homes, saying, "It is heartening that members of the business community step forward to address domestic violence, a vital public safety and health issue. This generous gift will strengthen our efforts to end domestic violence for women, families, and communities."

Alexandra House, now in its 30th year provides emergency shelter to more than 800 women and children annually. Community programs include legal advocacy and support, violence prevention efforts in the schools, and a wide-ranging community education effort for businesses, the faith community, service clubs, and professional groups. 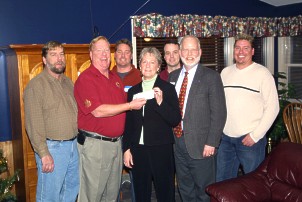 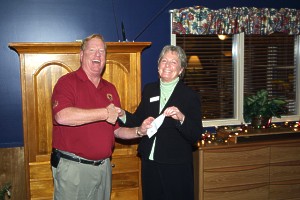 4/17/2006 ~ On April 17th Tom had the opportunity to share a few words about the new proposed Vikings stadium in Blaine in a meeting at the Tournament Players Club of the Twin Cities Golf Club. Jan/2006 ~ "LA MAISON DE LUGE" featured in Home Appliance Jan 06 Issue ~ Look no further. You are cordially invited to this 5,800- square -foot dream home in suburban Minneapolis- St. Paul, MN. Its beautiful and functional, and it leaves nothing to be desired. Every room in the home is perfect for entertaining, from the gourmet kitchen, to the family room, the home theater and spa, and when the day is done, a master bedroom fit for a king and queen. But beware: theres so much beauty and comfort, that your guests will never want to leave...