With the population aging rapidly, more builders are paying attention to making houses accessible to people of all abilities by incorporating universal design concepts.

Kevin Bjorklund had more than his share of living in apartments with unattractive grab bars and exposed plumbing that made living easier but looked institutional. "My dream was to own a home with functionality, but that didn't sacrifice aesthetics," said Bjorklund, a paraplegic ever since a childhood farm accident. "I wanted it to be inviting and beautiful."

While doing research he discovered universal design guidelines that specify home features useful for all, regardless of age and ability.

"Universal design is about usability, not disability," said Bjorklund, who works from his home as a product consultant for a technology company. "It's for creating environments that work for everyone."

Like the green building movement, universal design is steadily catching on and generating buzz, say people in the local housing industry. A National Association of Home Builders survey, for example, found that 56 percent of builders see universal design as a growing trend and expect the demand to increase dramatically by 2015.

In the past two years Bjorklund has helped design his Lakeville house and outfit it with more than 70 universal design features that accommodate his wheelchair but are unnoticeable to most.

Some are as simple as lever-style door handles (instead of knobs) and easy-to-reach electrical outlets placed mid-level on walls. Others are more structural, such as wider doorways, no-rise thresholds and varied countertop heights and depths.

Bjorklund's four-bedroom rambler even has several no-step decks that one can easily roll or step upon. And you won't find a single ramp anywhere.

The universal design elements that create easy living for people who use wheelchairs also allow people with other physical limitations such as bad knees or arthritis to age in place.

As more Minnesotans grow older and live longer (65 and over is the state's fastest-growing age group, which will double by 2030, according to the Minnesota Department of Health), builders are increasingly offering homes that accommodate their changing abilities. 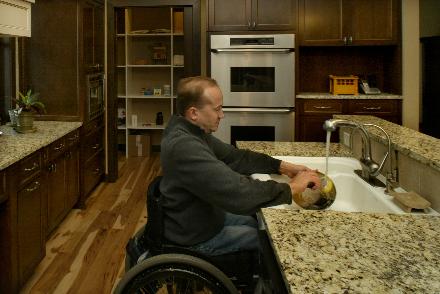 Doors are outfitted with easy-grip lever-style handles rather than knobs. Pocket doors are used as space savers. Transitions between rooms are all on one level.

Shoreview architect George Cundy, who has designed homes with some universal features for national and local builders, said that more clients are asking for things such as wider doorways and stepless front entries.

"If you're building and designing new housing communities geared for the 55-plus age group, you'll need to incorporate some of these features to be successful," he said. Cundy also is chairman of the Builders Association of the Twin Cities' 50-Plus Housing Council, which looks at housing issues for older residents.

Bruggeman Homes in White Bear Lake has already embraced the concept. For years the company has been building one-level townhouses with open floor plans, wide doorways and hallways, comfort-height toilets and reinforced bathroom walls in case grab bars need to be added. But they don't market the units as universal design or wheelchair-accessible.

"People want to age in place, but usually don't want to talk about it," said Bruggeman vice president Steve La Berge. "But they'll have wheelchair accessibility if they need it in the future."

Buyers will pay more for such conveniences, Cundy said. The extra cost, he said, is "not significant when you consider staying in your home a lot longer."

For Brenner, the biggest challenge was building the Bjorklund home without steps at the various entrances. "You have to really be aware of slopes, grades and water issues," he said.

Bjorklund feels lucky to have the home he dreamed of back in the days of handicap-accessible apartment living. Because of financial setbacks related to the sale of his previous property, Bjorklund has decided to sell the 4,600-square-foot Lakeville house, but hopes to build a smaller one where he plans to live as long as possible.

"The best part of universal design is that it allows you to grow old with the house you love," he said.